If your property was decorated or built in the 1970s or 80s, it’s pretty likely that you’ve got at least one artex ceiling. They’re essentially textured ceilings, usually with dimpled or round patterns. In actual fact, Artex is the name of a product, but people use the word to describe ceilings with other, similar materials.

Although lots of homeowners keep their artex ceilings, many people decide to cover or remove them. To do this you can plaster over your artex ceiling, create a false ceiling or replace it.

Here’s how to decide what’s the best option for you:

Work out if it contains asbestos 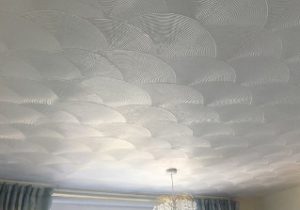 Before doing anything to your artex ceiling, it’s essential to work out if it contains asbestos. If you know that it was built after 1999, don’t worry, it shouldn’t contain asbestos. However, if it was built before that date, it’s highly likely that it might. This is due to the fact that asbestos used to be a key part of artex ceilings before it was outlawed in 1999.

If it’s likely that your ceiling could contain asbestos, you should get it tested. Ensure you source a testing professional who’s UKAS-accredited to do this – then you’ll know they’re competent and safe.

How to tackle an artex ceiling that contain asbestos

Taking down an artex ceiling that contains asbestos isn’t compulsory if you can work out a way to cover it without damaging it. But most ways of doing this, like laying plaster over your artex ceiling, involving sanding or weakening it in some way. This is highly likely to expose hazardous asbestos fibres and release them into your property, which is very dangerous.

So, if you want to alter your artex ceiling and realise that it contains asbestos, it’s best to hire some licensed professionals to remove it.

It’s also important to remember that if you don’t want to fork out for an asbestos company to remove your ceiling, you don’t have to. Providing it’s in a good state and you leave it alone it should be safe. But you will have to make your peace with the fact that your artex ceiling is here to stay.

If it doesn’t contain asbestos, should you replace or plaster over your artex ceiling?

If you don’t need to worry about asbestos, you’re free to decide the best way to approach it. You’ve got 3 main options: 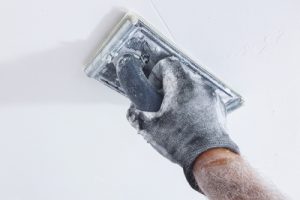 If your ceiling isn’t very thickly textured, you can sand or scrape off the pattern as much as you can. Then apply a couple of coats of PVA and skim a layer of plaster on top.

An alternative option is to build a false ceiling underneath your existing one and cover it with plasterboard. This is a great option if your ceiling is too densely textured to skim over.

If skimming won’t work and you don’t want to lower your ceiling height, a third option is to completely remove and replace your artex ceiling. This is likely to cost more than your other options but can often end up being the best long-term solution.

So, if you’re not certain whether you should plaster over your artex ceiling, follow this advice and you should get the answer. If you’re still undecided, get in contact with a plasterer for advice and quotes. Click ‘Start my project‘ to get up to 4 quotes from local professionals.

Do you Know the Difference Between Plastering and Skimming?