Thank you for requesting a call back one of our advisors will be calling you shortly.
Our opening hours are 9am - 7pm Monday to Wednesday, 9am - 5pm Thursday, 9am - 3pm Friday & Sunday.
Unfortunately this number does not seem to be correct, please check the number and try again.
Alternatively call us on 01603298001
Home >> Aerial installation >> North West >> Cheshire >> Crewe 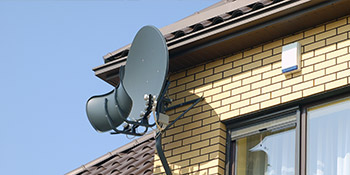 Get Aerial Installation Costs in Crewe

With a new aerial of satellite television mounted or fixed you'll increase the signal strength for the television, as well as box sets such as Freeview. Since there are many factors affecting your aerial strength, make sure to bring in the professionals.

Aerials and satellites are attached to both domestic and business properties. They have to be fitted to an external wall on the property to make certain maximum signal and boost the results. If you have an old receiver it is well worth upgrading to significantly improve reception.

We are able to supply you with up to four aerial and satellite installers in your town, who will supply quotes for the work you need carried out. You'll receive a house visit from experts in Crewe who'll help you choose the aerial or satellite for your property or home before completing the installation.

The installation of an aerial or satellite usually takes less than one hour to finish, dependent on your original connections and socket points.

By Miss Nicole B.

We noted 2,802 requests for house quotes in Crewe. Of these quote requests the number of aerial installation quotes in Crewe was 10. Quotatis would have been in a position to match these consumers with as many as 4 suitable fitters who were available for work in Crewe at that time. Request a free property survey from reputable companies in Crewe.

Aerial installation searches in cities and towns near Crewe January 2020

The pie chart just below presents the UK's populace according to regions. Britain's overall population exceeds 62 million, with the most significant portion of occupants located in the South East, Greater London and North West regions. The table beneath the pie chart indicates the UK's population in regions as a figure. As you can see, both the South East and Greater London currently have more than eight million occupants, while Northern Ireland and the North East hold the fewest inhabitants.

With the information underneath you will see the total number of solar power installations there have been in Crewe. Photovoltaic electricity continues to grow in popularity and many homeowners are now hoping to have this environmentally friendly technology installed on their rooftop to cut back energy bills and generate a tax-free income. Why not see if you can join the 1000s of UK property owners generating their own environmentally friendly energy.

The data below displays the average property price in Crewe. As a general rule, house prices have increased in value a great deal within the last 10 years. Nonetheless, recently prices seem to have stagnated and it's necessary to improve your home to add value.

The information underneath illustrates the property market for the last seven years and how many homes have sold within Crewe. As a result of large expenses related with moving home, many people are now opting to stay put rather than relocate. Home enhancements have become far more popular as people look to improve their property.

Have a home improvement job and need a recommended installer? Quotatis will help you find the best Pro in Crewe and nationally, so you get the best possible prices. Just search for your project and request up to 4 quotes.