Aerial or Satellite Installation in Prescot

Aerial or Satellite Installation in Prescot

With a brand-new aerial of satellite installed or fixed you'll improve signal strength for your television, as well as box sets such as Freeview. Because there are various aspects affecting your aerial strength, be sure to bring in the experts.

Aerials and satellites are fixed to both domestic and commercial properties. They need to be fixed to an outside wall on the property or home to ensure optimum signal and heighten the results. In case you have an old receiver it is worth upgrading to drastically improve reception.

We can give you around 4 aerial and satellite television installers locally, who'll offer quotations for the work you would like carried out. You'll receive a home visit from experts in Prescot who will help you to choose the aerial or satellite for your property or home before completing the installation.

The fitting of an aerial or satellite normally takes under one hour to finish, dependent on your original connections and socket points.

Aerial and satellite installation costs can differ depending on the type of aerial or satellite dish you want, how easy it is to access your roof or loft, and where you live. If youâre simply buying and setting up an indoor aerial, this wonât cost you more than about £10 â a little more if you need additional cables. But if youâre going to install an outdoor aerial or satellite dish, the common cost is about £180. This is because theyâre trickier to set up, so lots of people hire professionals to help them.

Aerial installation searches in May 2021

Requests for quotations in Prescot in April 2021

Requests for Aerial installation quotations in Prescot in April 2021. 0% change from March 2021.

Requests for Aerial installation quotations in Merseyside in April 2021. 100% change from March 2021.

We noted 278 requests for property quotes in Prescot. Of these quotation requests the amount of aerial installation quotes in Prescot was 1. Quotatis would have been able to match these consumers with as many as four suitable installers who were available for work within Prescot during that time. Ask for a free house survey from trustworthy companies in Prescot.

Aerial installation searches in cities and towns near Prescot April 2021

Requests for quotations in Liverpool in April 2021

Requests for quotations in Bootle in April 2021

Requests for quotations in Ormskirk in April 2021

Requests for quotations in Prescot in April 2021

Prescot is a town and civil parish within the Metropolitan Borough of Knowsley in Merseyside, England. Typically component of Lancashire, it is located around 8 miles to the eastern of Liverpool city centre. Prescot notes the start of the A58 road which runs through to Wetherby, West Yorkshire. According to the 2001 Census, the long-term population of the town is around 11,184. Within this population, there are about 5,265 men and 5,919 women. Prescot's name is believed to originate from the Anglo-Saxon preost 'clergyman' as well as 'cot', indicating a cottage or small residence possessed or occupied by a priest, a 'priest-cottage'. In the 14th century, William Dacre, 2nd Baron Dacre, obtained a charter for the holding of a three-day market and portable fair at Prescot, to begin on the Wednesday following Corpus Christi. From the center of the 1590's to 1609, Prescot was residence to the Prescot Play House, a Shakespearean theatre, built near Eccleston Road. Over the last few years, a number of cultural and arts events have been developed in the community, including the annual 10-day Prescot Event of Songs and also the Arts as well as a yearly Elizabethan Fayre. The Shakespeare North Trust fund promotes William Shakespeare's historical link with the community, a subject being looked into at Liverpool's John Moores College. Motivated by the historical Prescot Play house, the Trust prepares to construct the Shakespeare North facility in Prescot, consisting of a Shakespearean playhouse and an academic centre. In April 2016, Knowsley Council granted planning authorization for the brand-new playhouse. Stone Road, running in between High Road as well as Eccleston Road, is just 26 inches broad at its southerly end and is just one of the narrowest streets in Britain. For all of your residence improvements, be certain to identify credible specialists in Prescot to make sure of quality.

Looking for Aerial installation in Prescot?

Fast efficient service and everything checked and working correctly before leaving

He called nxt morning I was very impressed

The service which was provided by this company was first class and I would not hesitate to recommend them to my family a...

Walsh Aerial and Satellite Services is a family run, local one man band business. We cover the North West of England. We provide, professional, quality, friendly service at very reasonable prices. We aim to install and repair any customers problems w...

Extremely helpful and knowledgeable, would recommend him.

Phoned within 1 hr of me requesting a quote .came out following morning. Very reasonable price. Really happy with servic...

customer visited the myaerialinstallation.co.uk site and submitted an enquiry. property type: semi detached service required: install only, work description: satellite was mounted on the front of the...

Enquiry from: Philip B

my sky dish was fitted 19 years ago now a tree in a neighbour`s garden where my dish points to has grown very big. every time it is windy i lose signal i need my dish moving and possibly replacing. ho...

Customer visited the myaerialinstallation.co.uk site and submitted an enquiry. Property type: Semi detached, Service required: Install Only, Work description: blown down it on the roof

Enquiry from: Kenneth B

customer visited the myaerialinstallation.co.uk site and submitted an enquiry. property type: detached, service required: install only, work description: aerial appears to have been damaged during re...

Enquiry from: Heather B

Tell us about your Aerial installation project

Find up to 4 Aerial & Satellite Installers in Prescot

Excellent service all round would r ...

Excellent service all round would recommend

A good and clear prompt service,job ...

A good and clear prompt service,job done straight away without any problems or mess

Your TV and aerial need to be connected by coaxial cable for your TV to work. Most properties have wall mounted connection boxes – similar to electrical plugs – that you can simply plug your TV into. If you don’t have a cable, it’s easy to pick up one from most DIY shops.

If you’re installing a new outside aerial, you may be able to reuse the old cable. If you can’t, you’ll need to route a new one down from your aerial to any sockets you need. Coaxial cable can be routed down the exterior of your property, through loft spaces, under floors and along skirting boards.

Freeview is only available through a TV aerial. You can’t access Freeview using the internet, so you’ll need to invest in a TV aerial if you haven’t got one already.

Satellite TV is a service that provides its customers with a wide range of TV channels by transmitting signals from a communications satellite. Users around the world can pick it up using a satellite dish mounted on their property and connected to their TV. Satellite TV is particularly useful for viewers who live out of aerial and cable TV range in remote areas.

Generally speaking, you do need an aerial if you have a smart TV. This what will enable you to watch live TV. However, if you’re not bothered about live TV, and just want to use services like Netflix, Amazon Prime and Youtube, you don’t normally need a TV aerial. This is because these services use the internet instead. 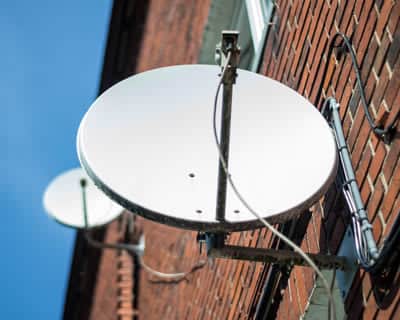 Other Top Projects in Prescot

3 TV Aerial Myths Well and Truly Busted Published: 18/08/2016 The chances are that you’ve heard at least one of the most popular TV aerial myths. Some of these myths have become common knowledge, so we want to reveal the truth so you don’t spend your money on things you don’t need. Here are 3 of the most believed TV aerial myths busted. 1. You […] Read this article
Do you Really Need a New Aerial? Published: 23/06/2016 Before you go ahead and get a new aerial, it’s worth doing some research to help you make the decision about which TV aerial to choose. And it’s possible that you might not even need a new aerial. Take a look at these points and see whether any of them apply to you before you […] Read this article
How to Install an Aerial on a Flat Roof Published: 28/04/2016 Sometimes TV aerials or satellite dishes have to be installed on a flat roof if the reception equipment has to be fitted onto the roof of office or flats where wall mounting an aerial would cost too much and make repairs and servicing difficult. Installing the aerial on the roof is a great way to […] Read this article

Are you a aerial & satellite installer in Prescot?

We can help you get more Aerial installation work and boost your business.