Thank you for requesting a call back one of our advisors will be calling you shortly.
Our opening hours are 9am - 7pm Monday to Wednesday, 9am - 5pm Thursday, 9am - 3pm Friday & Sunday.
Unfortunately this number does not seem to be correct, please check the number and try again.
Alternatively call us on 01603899910
Home >> Bathroom fitting >> South East >> Kent >> Sheerness 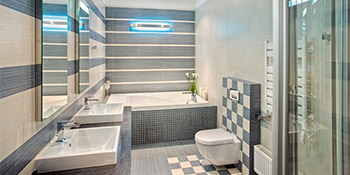 Every home needs a bathroom which looks great whilst also having a calming feel to it. However, lots of properties are lumbered with a little room, or maybe have worn units and old appliances.

Renovating your bathroom is a good strategy to solve these issues and using the advice and experience of a specialist is often the best way to go about things.

With plenty of plumbing essential for accessories like toilets, showers and sinks, you'll need to call on a specialist plumber to carry out the installation. You'll also need a expert if you're planning on rewiring the electrics too.

Whether or not you employ the very same space as before or increase the bathroom, it's probable you'll need to have part or all of the installation carried out by an expert.

We'll supply you with as many as four bathroom contractors in your area, who'll offer quotes for the installation. You'll receive a house visit from specialists within Sheerness who will supply and install the bathroom for a terrific price.

Bathroom fitting searches in during August 2020