Thank you for requesting a call back one of our advisors will be calling you shortly.
Our opening hours are 9am - 7pm Monday to Wednesday, 9am - 5pm Thursday, 9am - 3pm Friday & Sunday.
Unfortunately this number does not seem to be correct, please check the number and try again.
Alternatively call us on 01603899910
Home >> Conservatory cleaning >> South East >> Buckinghamshire 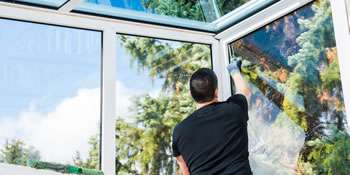 Get Conservatory Cleaning Costs in Buckinghamshire

When conservatories are perfectly designed they look great, from both an interior and external viewpoint. They provide you with an abundance of light and space and no matter the style, provide you with a number of options.

Therefore what's vital should be to keep your conservatory well-maintained. By ensuring the conservatory is frequently cleaned you can prevent any major repairs and charges later on.

Obviously, because of the many glass panes the chances are grime and dirt will quickly accumulate, along with algae. In the event that this is left for too long several problems can occur. For uPVC conservatories there might be staining, whilst rust could occur to metalwork and seals may start to leak, harming the performance.

Whether you have spent a lot of your own money into a brand new conservatory, or have inherited it as part of a property you've bought, it's crucial to keep it in perfect condition.

There are many different types of home around the UK for people who have varying family sizes and annual incomes. Typically the most popular houses tends to be terraced homes and semi-detached properties, generally simply because they're cheaper and easier to fit into regions including cities where space is limited. Other kinds of property in Britain include detached homes and smaller scale properties such as bungalows and flats. It's important to add value to the home and enhancements are the best way to do this, whether or not it's with the installation of a conservatory or just cosmetic changes. Regardless of the work you would like completed on your home, assess quotations from reputable companies using our fast and simple service.

Most houses around the UK will have central heating of some type, whether or not it's gas, oil or even a biomass fuel. If you don't have a central heating system, it is likely you make use of heaters to help keep warm, run by electricity. Changing to main heating is going to be a lot more efficient for your house and you can save hundreds of pounds yearly. View below just how many properties are central heated in Buckinghamshire.