Thank you for requesting a call back one of our advisors will be calling you shortly.
Our opening hours are 9am - 7pm Monday to Wednesday, 9am - 5pm Thursday, 9am - 3pm Friday & Sunday.
Unfortunately this number does not seem to be correct, please check the number and try again.
Alternatively call us on 01603899910
Home >> Exterior painting and decorating >> North West >> Lancashire >> Manchester 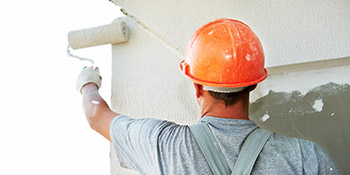 Get Exterior painting and decorating Costs in Manchester

Exterior decorating in your home or commercial building can be a inconvenience. With the job of having to erect scaffolding you'd be much better off employing a specialist. And this may be less expensive than you'd imagine in Manchester.

Homes which are the best taken care of are repainted normally every three to five years. The benefits are obvious, with an improved visual appeal evident. By hiring a professional they'll talk about your ideas and make certain you have everything you wish from the contract.

The external painters and decorators in our database have all been checked out and approved, often supported by new business for their quality of work.

Using our simple and fast service you can look at quotations between specialists and then make certain to get the best deal available.

Get Quotes from Exterior painting and decorating installers in Manchester

Exterior painting and decorating in Manchester

Exterior decorators searches in cities and towns near Manchester July 2020

Underneath you will see the UK's total populace based on regions of the country. The overall population of the UK is now over 62 million, with London and the South East keeping quite a large percentage of this. On the other hand, Northern Ireland and the North East of England possess the least inhabitants in the whole of the UK.

With the information below you can view how many solar power installations there have been in Manchester. Photovoltaic electricity continues to grow in popularity and lots of homeowners are now wanting to have this green technology placed on their rooftop to reduce energy bills and generate a tax-free income. Why don't you see if you can join the thousands of UK homeowners producing their own green friendly electricity.

The data below shows the average home price in Manchester. For the most part, property prices have increased in value drastically within the last 10 years. Nonetheless, lately prices seem to have stagnated and it's essential to improve your home to add value.

The data beneath shows the property market for the last seven years and how many homes have sold in Manchester. Because of the large expenses associated with moving home, many people are now looking to stay put rather than relocate. Home improvements have become far more popular as people look to improve their home.

Have a home improvement task and need a recommended professional? Quotatis will help you find the best Pro in Manchester and nationally, so you get the best possible price. Just search for your project and request up to 4 quotes.