Thank you for requesting a call back one of our advisors will be calling you shortly.
Our opening hours are 9am - 7pm Monday to Wednesday, 9am - 5pm Thursday, 9am - 3pm Friday & Sunday.
Unfortunately this number does not seem to be correct, please check the number and try again.
Alternatively call us on 01603899910
Home >> Floor tiling >> Yorkshire & Humber >> South Yorkshire >> Sheffield 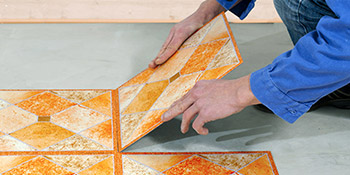 Floor tiling is an extremely well-known material for homes within the UK, so do a comparison of quotes from companies in Sheffield with our free online service.

Whichever room you're decorating or redesigning, the floor plays an integral part in the finished appearance. Of course, the material used must tie in with the rest of the room's features.

Around the home you'll most likely use carpeting a great deal. It's easily the favourite material for comfort and ease and design and suitable in many of our key rooms such as the bedroom and living room. Not surprisingly, this wouldn't be suitable in the bathroom or kitchen though.

Which is where tiling will come in. For these two parts of your home it's best to have something sturdy and durable, whilst being water resistant too. Floor tiling fits all of these specifications and it's found in a number of designs and styles also.

By making use of our fast online service we will supply you with as many as 4 free quotations from floor tiling companies within Sheffield. You'll be given a totally free house visit, so your floor area could be calculated and a variety of styles given to you.

Get Quotes from Floor tiling installers in Sheffield

We noted 21,648 requests for property or home quotations in Sheffield. Of these quote requests the amount of floor tiling quotes in Sheffield was 10. Quotatis would have been able to match these customers with up to 4 suitable fitters who were available for work in Sheffield during those times. Request a free house survey from reliable companies in Sheffield.

Floor tiling searches in cities and towns near Sheffield July 2020

The pie chart directly below presents the UK's populace according to regions. Britain's whole population is greater than 62 million, with the biggest fraction of people in the South East, Greater London and North West regions. The table below the pie chart indicates the UK's population in regions as a figure. As you can see, both the South East and Greater London possess more than eight million occupants, while Northern Ireland and the North East hold the fewest inhabitants.

Using the information below you will see the number of solar power installations there are in Sheffield. Photovoltaic electricity has grown in popularity and a lot of homeowners are now planning to have this environmentally friendly technology installed on their rooftop to cut back energy bills and generate a tax-free income. Why don't you see if you can join the 1000s of UK householders producing their own eco friendly energy.

The UK property market has slowed down slightly throughout the last ten years as more people choose to stay put rather than relocate. This is mainly because of the significant costs associated with moving and people are deciding to build conservatories or convert rooms in the house to get extra space.

The table beneath shows how many homes have sold in Sheffield throughout the last 7 years. The housing market is currently in a decline, with many homeowners choosing to stay put and enhance their property rather than relocate. Improving your own home can see you add thousands of pounds towards the value and betters your odds of selling too.

Have a home improvement project and need a quality tradesperson? Quotatis will help you find the best Pro in Sheffield and nationally, so you get the best possible price. Simply search for your project and we can find you up to 4 quotes.