Front doors are an important part of any house and thus, must have a number of features to ensure they're suitable. Hardwood doors are one option and in fact very popular amongst householders for several reasons.

For a front door, you will need excellent security, weather resistance, durability and even more importantly, fantastic aesthetic appeal. And that's just what a hardwood front door offers you. They look brilliant and you may even choose from a range of colours and amazing designs to create a unique appeal for the home.

No matter your property, you could look at a Victorian, Edwardian modern or even country front door design. Then the colour could range from a traditional white or black, to the much more bold red, green and blue.

Hardwood doors are preferred over the less expensive uPVC option due to the fact they're much more resilient and look excellent. They may set you back slightly more, but the expense is worth it if you think about the great benefits.

Requests for quotations in Newton-le-willows in March 2021

Requests for Hardwood doors quotations in Newton-le-willows in March 2021. 25% change from February 2021.

Requests for Hardwood doors quotations in Merseyside in March 2021. 33% change from February 2021.

We recorded 867 requests for property improvement prices in Newton-le-willows. Of such quotation requests the amount of hardwood doors (type: modern front doors, contemporary front doors etc...) was 5. Quotatis had been able to match up these customers with up to four ideal professionals that were available for work in Newton-le-willows back then.

Requests for quotations in Warrington in March 2021

Requests for quotations in St Helens in March 2021

Requests for quotations in Widnes in March 2021

Requests for quotations in Runcorn in March 2021

Requests for quotations in Altrincham in March 2021

Newton-le-Willows is a market town in the Metropolitan Borough of St. Helens in Merseyside, England. Traditionally a part of Lancashire, it is positioned equidistance, about 15 miles, between the cities of Liverpool and Manchester, 4 miles to the east of St. Helens, 5 miles to the north of Warrington and 7 miles to the south of Wigan. The town is comprised of 4 districts, Earlestown, Wargrave, Vulcan Village and the ancient Newton in Makerfield area. The A49 road passes through the centre of Newton, which has a variety of structures from the Georgian period, and is an enticing residential area. The arrival of the railways in 1830 transformed the town from an agricultural village into the world's very first 'railway town', though locations such as Crewe, Derby and Swindon quickly surpassed Newton in size and significance. The Vulcan Foundry, formed in 1831, turned into among the world's first engine suppliers. Vulcan Village, established to offer homes for the factory workers, is now a conservation area. Cricket is the primary sport in the town, with Newton C. C. playing in the Premier Division of the Liverpool Competition, a North West league with teams from the Eylde coast to North Wales. The principal shopping street, Market Street, is pedestrianised, and other shops can be discovered on Bridge Street, Oxford Street, Queen Street and Earle Street. The marketplace continues to be a prime tourist attraction for visitors from the surrounding regions, with a number of small, long established independent retailers staying despite the increased number of national retail organisations in the town. For all your house upgrades, make sure to make use of trustworthy experts in Newton-le-Willows to make certain of quality.

Looking for Hardwood doors in Newton-le-willows?

Quote was competitive but I decided to give the job to JD Classic Paving.

customer has confirmed they would like a quote for a door. are you the property owner: owner of the property property type: detached do you require doors: upvc door additional quotes for doors: yes p...

external wooden frame and wooden door are you the property owner: tenant (with permission) property type: semi detached do you require doors: front door how many doors are you looking for: 1 door what...

Hi I need 6 interior doors and handles fitted I have bought the doors that have the same measurements as the old doors so will go straight on how much would this cost to be done? Many thanks

Tell us about your Hardwood doors project

Find up to 4 Door Installers in Newton-le-willows

Easy to use. Excellent suggestions. ... 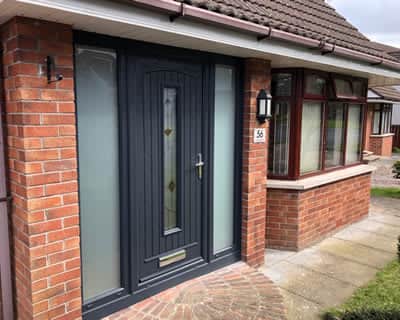 Other Top Projects in Newton-le-willows

5 Ways to Give Your Front Door a New Lease of Life Published: 18/03/2017 As it’s one of the first things that people see when they come to your home, your front door is worth investing in. A beautiful front door can create a great first impression to visitors and make you feel happy to be home. As an external part of your home, your front door can deteriorate […] Read this article
Should my Burglar Alarm go off during Power Cuts? Published: 18/10/2016 You might be wondering whether your burglar alarm will still protect your home in a power cut. What if you’re on holiday and the power goes out, meaning your home is subject to unwanted visitors? Well we’ve got the answers here. The short answer: no. Your burglar alarm really shouldn’t go off during a power […] Read this article
4 Signs it’s Time to Buy a Composite Front Door Published: 30/08/2016 How long have you had your front door? If you can’t remember, it’s probably time you changed it. And when you do, it’s worth considering a composite front door. Composite front doors are made from a range of materials. They are made up of uPVC, wood, insulating foam and glass reinforced plastic (GRP). This combination […] Read this article

Are you a door installer in Newton-le-willows?

We can help you get more Hardwood doors work and boost your business.