Thank you for requesting a call back one of our advisors will be calling you shortly.
Our opening hours are 9am - 7pm Monday to Wednesday, 9am - 5pm Thursday, 9am - 3pm Friday & Sunday.
Unfortunately this number does not seem to be correct, please check the number and try again.
Alternatively call us on 01603298001
Home >> Orangery >> North West >> Lancashire >> Manchester 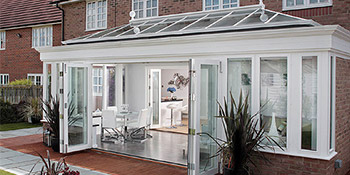 Are you thinking about adding an orangery to your home for extra space and to improve your home's value? Then make use of Quotatis to compare and contrast quotes from around four orangery companies in Manchester and get the best deal.

Orangeries have increased in popularity as a way to extend your property. Specialist installers can take your specifications and advise some of their own ideas to provide you with a fantastic finish. The professional installer should be able to help you with everything from the style to Building Regulations.

With an all new orangery you'll have further space right away and the building will look great, particularly with a traditional home. This extra space can be used for a number of purposes and could act as additional living space, a playroom or garden room.

If an orangery would benefit your home and you would like to add extra space to your property, be sure to review prices from around four orangery companies in Manchester using our quick and simple service.

Orangery Projects in Manchester in January 2020

Orangery searches in cities and towns near Manchester December 2019

The pie chart underneath presents the UK's populace using regions. Britain's total population exceeds 62 million, with the greatest portion of residents found in the South East, Greater London and North West regions. The table under the pie chart reveals the UK's population in regions as a figure. As you can see, both the South East and Greater London have in excess of eight million occupants, whilst Northern Ireland and the North East include the fewest inhabitants.

The data below shows the complete number of solar PV installations within Manchester. Solar power systems have increased in popularity largely due to the Government's rewarding feed-in tariff incentive, which pays out per unit of renewable electricity created. Join these property owners and begin generating your own electricity today.

The information underneath displays the typical property price in Manchester. Generally speaking, property prices have increased in value a great deal over the past decade. Nonetheless, lately prices appear to have stagnated and it's important to improve your home to add value.

The info beneath illustrates the house market for the past 7 years and how many homes have sold within Manchester. Because of the large expenses associated with moving home, many people are now opting to stay put rather than relocate. Home enhancements are becoming much more popular as people look to improve their property.

Have a home improvement task and need a recommended professional? Quotatis will help you find the best professional in Manchester and nationally, so you get the best possible prices. Just search for your project and we can find you up to 4 quotes.