Thank you for requesting a call back one of our advisors will be calling you shortly.
Our opening hours are 9am - 7pm Monday to Wednesday, 9am - 5pm Thursday, 9am - 3pm Friday & Sunday.
Unfortunately this number does not seem to be correct, please check the number and try again.
Alternatively call us on 01603899910
Home >> Solar panel >> South East >> Hampshire >> Southampton 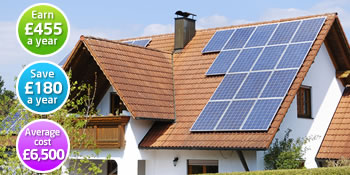 Have you been thinking of solar panel systems for your Southampton household and want to get quotes to determine if this environmentally friendly technology is perfect for you? Then you've arrived at just the right place and can start saving money on your electricity bills quickly using our service.

Solar panel systems are among the fastest growing sources of energy in the UK, providing homes with free electrical power throughout the year from the sun's natural rays. When sunshine hits the solar energy panels, which are commonly fitted at an optimal position on the roof, an electrical field is generated and power is supplied to the home.

For property owners, this can see a annual saving of about £100 on power bills. However, this isn't the principal profit of solar power. The Government's feed-in tariff scheme in fact will pay you for renewable electricity generated, and on average this works out to approximately £600 annually with a 4kW system hooked up.

On top of this there's the chance to get payments from the National Grid by selling additional electricity. And of course, making use of this equipment is beneficial to our environment and will save tonnes of carbon dioxide from being produced within the system's lifetime.

If you're considering a potential installation, complete our online form and receive up to four free photovoltaic panel prices in Southampton to be sure of having the very best price and a respected company.

Connecting me to a supplier.

Introduced me to companies that i had not previously been aware of or contacted.

Quotatis did the research work for us.

We noted 10,571 requests for property or home quotations within Southampton. Of these quote requests the number of solar panel quotes in Southampton was 390. Quotatis would have been in a position to match these customers with up to 4 suitable fitters who were available for work in Southampton at that time. Request a free property survey from reputable companies in Southampton.

Solar panel searches in cities and towns near Southampton May 2020

Beneath you can see the UK's overall population based upon areas of the country. The overall populace of the United Kingdom is now over 62 million, with London and the South East possessing quite a significant portion of this. In contrast, Northern Ireland and the North East of England possess the least inhabitants in the whole of the UK.

The data beneath displays the complete number of photovoltaic installations within Southampton. Solar panel systems have increased in popularity principally because of the Government's highly profitable feed-in tariff incentive, which pays out for each and every unit of green electricity produced. Join these householders and begin producing your own electricity today.

The information below illustrates the average property price in Southampton. On the whole, home prices have increased in value a great deal within the last 10 years. However, in recent times prices appear to have stagnated and it's vital to improve your home to increase value.

The information underneath illustrates the property market for the past seven years and precisely how many homes have sold within Southampton. As a result of large costs related with moving home, many people are now choosing to stay put rather than relocate. Home improvements have become much more popular as people look to improve their home.

Have a home improvement project and need a recommended installer? Quotatis will help you find the best company in Southampton and nationally, so you get the best possible value for money. Just search for your project and request up to 4 quotes.