Tree surgeons are required for back gardens and commercial properties. They have got the expertise to manage trees, including removing branches to permit more light into the garden, or completely removing the tree.

The clean-up will all be done by the professional also, so that all the debris will be taken away after the job has been completed. This ensures you won't have to take numerous trips to the skip with bin liners stuffed with waste.

We will offer you as many as 4 tree surgery companies in your town, who'll offer quotes for the work you'd like carried out. You'll get a home visit from experts in Freshwater who will carry out the tree surgery for a very good price.

Requests for quotations in Freshwater in February 2021

Requests for Tree surgery quotations in Freshwater in February 2021. 200% change from January 2021.

Requests for Tree surgery quotations in Isle Of Wight in February 2021. 0% change from January 2021.

Tree surgery searches in cities and towns near Freshwater February 2021

Requests for quotations in Ryde in February 2021

Requests for quotations in Gosport in February 2021

Requests for quotations in Fareham in February 2021

Requests for quotations in Portsmouth in February 2021

Requests for quotations in Newport in February 2021

Freshwater is a town in the United Kingdom with the overall population less than 30,000. It is one among over 1,000 towns in Britain and there's a wide range of houses available from modern to traditional. In today's home market it's essential to increase or hold on to value to your home using improvements in various crucial parts. Whether or not you would want to set up environment friendly technologies, improve your inefficient windows or replace a faulty boiler, there are a variety of advantages to be had. For the work you need completing around your household, the best choice is to compare and contrast quotations from trustworthy specialists in Freshwater. By doing this it is certain of acquiring the right cost for almost any work you wish carried out and you'll have the opportunity to select the best company for the job. Do a comparison of quotations today between vetted tradespeople in Freshwater and improve your home.

Get free no obligation quotes

High crown tree surgeons is a small family run buisness with over fithteen years experince we pride our selves on carrying out work to the highest of standards. From the smallest of shrubs to large tree removals we cover all aspecs of tree care and a...

Southern tree services offers you a efficient and professional service!

Excellent and I am going ahead with the work using this company. Very polite and thorough in our discussions.

Customer visited the mytreesurgeon.co.uk site and submitted an enquiry. Work description: general and pollarding if necessary

I need 6 tree stumps removed or grinded Homeowner Please contact to appoint Are you the property owner: Owner of the property What work do you require: Tree removal How many trees require work: ...

large hedge trimming, approx 40 metres of hedge and removal of trimmings. are you the property owner: owner of the property

Enquiry from: Andrew B

customer visited the mytreesurgeon.co.uk site and submitted an enquiry. work description: reduce the height and size of the crown of a sugar maple tree - reduce by about 30% tree is approximately 10-...

have recently moved to this address. we have been informed a tree in the garden will need to be felled. we are in the preservation area, but have written consent for it to be felled. the tree is a hor...

Customer visited the mytreesurgeon.co.uk site and submitted an enquiry. Work description: Looking to get a tree reduced at the front of my property

customer visited the mytreesurgeon.co.uk site and submitted an enquiry. work description: removal of one tree that has fallen on the fence and possibly 3 others that look dead, i will need you to ass...

Enquiry from: Terry B

customer visited the mytreesurgeon.co.uk site and submitted an enquiry. work description: to fully remove a crab tree including the stump are you the property owner: tenant (with permission) what wor...

customer visited the mytreesurgeon.co.uk site and submitted an enquiry. work description: we have two very large camellias that need a lot taken off them are you the property owner: owner of the prop...

Customer visited the mytreesurgeon.co.uk site and submitted an enquiry. Work description: cutting back a pittus sporum and a bay leaf tree

full garden overhaul - put garden to bed for end of summer are you the property owner: relative of owner is the work for domestic or commercial purposes: domestic how many trees require work: 1 tree w...

customer visited the mytreesurgeon.co.uk site and submitted an enquiry. work description: trimming of an apple and crab apple tree. two trees in total. are you the property owner: owner of the proper...

Ne***ee cutting down by half as blocking sun to my next door neighbour.

Customer visited the mytreesurgeon.co.uk site and submitted an enquiry. Work description: I have 3 or possibly 4 tall trees that need felling. 2 cherry 1 Birch and 1 Llilandia Can you kindly quote

Tell us about your project

Find up to 4 local pros

Get free, no-obligation quotes from 4 verified professionals working in your area.

Find a tradesman Very satisfied with prompt action and success in finding a suitable tree surgeon for my needs. I would recommend them to friends and family without hesitation.

Used this site for the first time f ...

Used this site for the first time found it Very easy would us it again,

They did a great job will use them ...

Tree surgeons will be able to remove any logs or wood chippings produced by the work carried out from your garden. They will then dispose of these in an environmentally friendly manner. Generally the companies will cut and dry the wood and then sell it on to the local community.

In many instances tree surgery work can still be carried out on trees that are protected by Tree Preservation Orders (TPOs). Tree surgeons will be able to file the needed forms with the local authority to arrange such work, and advise you throughout the entire process.

Even if your trees are not obviously damaged or diseased, tree surgeons can carry out surveys to determine if there is any work that needs to be carried out. This work could range from removing dead branches, pruning to promote growth, or even crown works which could open up more light into your property by altering the height and size of nearby trees.

Many tree surgeons offer a specialist service for trees that cannot be easily felled via a simple cut. Sectional dismantling is used which involves making several cuts to slice the tree into small sections which can be brought back to the ground safely. Using this method will allow tree surgeons to fell trees that pose risks to nearby buildings in a safe manner. 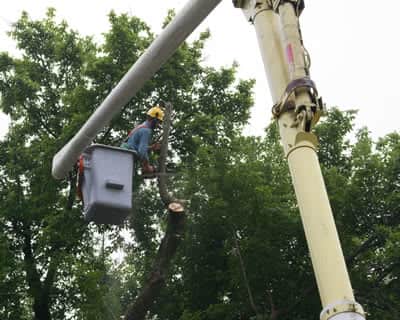 Other Top Projects in Freshwater

Freshwater Tree surgery installers are rated 5 out of 5 based on 3 reviews of 39 pros.
The Quotatis rating and review is an overall rating based on verified reviews and feedback from the customers with Tree surgery projects that have been connected with Tree surgery pros to help them. All Tree surgery contractors All Freshwater Tree surgery contractors
5 More Inspirational Celebrity Chef Kitchens to Recreate in Your Home 6 Reasons to Buy an Aluminium Front Door 9 Flat Decoration Ideas for a Cosy Home 6 Small-Budget Living Room Décor Ideas 9 Great Small-Budget Home Decor Ideas 7 Affordable Paint Colours You Need in Your Home 8 Top Baking Essentials for Your Kitchen

Are you a Tree surgery pro in Freshwater?

We can help you find more work and boost your business.