Are you considering getting fencing installed in Goole? By using the Quotatis service it's possible to check as many as four fencing installers in order to get the top deal available for the work you want.

Fencing is very important for all houses no matter whether it's the front or back garden. From repair work to a complete installation of new fencing, working with a reputable company is highly recommended to get the very best price available.

Fences act as a boundary to our properties and with an installation you'll increase protection to your home preventing easy access to your back garden. Back garden fences are usually around six feet high, which right away makes it more challenging for intruders to gain entry.

Decorative fencing or wooden picket fencing will often be best suited for the front garden, where security isn't as vital. Instead, you're more likely to choose a front garden fence particularly for design and to add something different.

For whatever sort of fencing you're wanting to have installed, make sure you make use of our free and no obligation service to get the best deal available in Goole.

Requests for quotations in Goole in March 2021

Requests for Wooden fencing quotations in Humberside in March 2021. -17% change from February 2021.

We noted 578 requests for property quotations in Goole. Of these quotation requests the amount of wooden fencing quotes in Goole was 0. Quotatis would have been in a position to match these consumers with as many as four suitable installers who were available for work in Goole during those times. Request a free house survey from trustworthy companies in Goole.

Wooden fencing searches in cities and towns near Goole March 2021

Requests for quotations in Doncaster in March 2021

Requests for quotations in Gainsborough in March 2021

Requests for quotations in Retford in March 2021

Requests for quotations in Barton-upon-humber in March 2021

Requests for quotations in Barnetby in March 2021

Goole is a town, civil parish and inland port in the East Riding of Yorkshire in England, although traditionally within the West Riding of Yorkshire until 1974. At the time of the 2011 Census, the town had a permanent population of 19518, a respectable growth from the 17600 residents documented in the 2001 Census. Not only is Goole home to the UK's outmost inland port, it is also among the most important ports on the east coast of England. It is exceptionally accommodating to various conditions arising in a port and it is able to manage around 3 million tonnes of freight each year. The port of Goole has a constant cargo liner service to locations such as Norway, Sweden, Finland, Germany, the Netherlands, Belgium, France, Spain, Morocco and South Africa, in addition to a transhipment route to Europort in Rotterdam. Goole has an economy characterised by a mixture of agriculture and industry. Glass is presently produced in Goole, and a notable employer before the late 2000s was a clothing manufacturer for a number of major firms. The town centre of Goole consists of a wide range of shops for its modest size, providing citizens and tourists with the option of independent shops and commercial chain shops. Wesley Square is deemed the main area for shopping, which is pedestrian-friendly to make it easy for a more manageable shopping experience. Also discovered within the town centre is a leisure centre, the Goole and District Hospital, and a cinema. Goole's most well known landmark is its twin water towers, referred to as the 'salt and pepper pots', with the town's skyline being made up of mostly utility and industrial structures. For all your home upgrades, make certain to make use of dependable experts in Goole to make certain of quality.

Looking for Wooden fencing in Goole?

Good price for work, carried out quickly and a good fence installed

STTS is a family-owned Barnsley-based business specialising in all aspects of tree work, from crown reductions to full dismantling and stump removal

A.Smith Ground and Garden Services is my recently started up company based just on the out skirts of Bardney, Lincolnshire. Doing all aspects of ground and gardening work, from installations and maintenance of all hard standing areas- block paving, g...

Efficient, friendly service - kept informed on all stages of work which was completed with in the time promised.

We are a family run buissness for the last 25 years, we cover building, Roofing & landscaping

I withdrew from this - have decided not to go ahead

Only had one company contacted us , so we are going elsewhere for quotes.

customer made an enquiry for fencing and confirmed on the quotatis site they would like quotes from a landscaper.mrs lives in the goole area and would like a call to discuss options.see below details ...

small fence panel to replace are you the property owner: owner of the property property type: terrace how many fence panels are you looking for: 1-2 panels what level of service do you require: supply...

garden fencing for one side of garden. post and panel system to match other side. are you the property owner: owner of the property property type: detached how many fence panels are you looking for: 5...

i have two jobs that need doing one is quite urgent and is in goole - 47 newport street *** and the fence at the bottom of the garden needs replacing and this time with concrete posts instead of wood ...

6ft heavy duty timber fence 30m long to replace existing woven timber fence. Are you the property owner: Owner of the property Property Type: Detached How many fence panels are you looking for: 5+ Pan...

Crash damage 1 concrete post 2 concrete bottom panels to replace Are you the property owner: Owner of the property Property Type: Detached How many fence panels are you looking for: 1-2 Panels What le...

Picket fence with gate and 2 single side gates Are you the property owner: Owner of the property Property Type: Semi detached How many fence panels are you looking for: 3-4 Panels What level of serv...

4 fence panels concrete post Are you the property owner: Relative of Owner

Find up to 4 Landscapers in Goole

Get free, no-obligation quotes from 4 verified Landscapers working in Goole.

The cheapest fence to install is, generally, a pressure-treated pine wooden fence at around £20 per linear foot. This includes the materials and labour costs. Wire fencing is technically cheaper at around £5 per foot, but it’s not a great material to use in homes as it looks unsightly and doesn’t provide any privacy.

The most basic fencing starts at about £27 per panel. But if you want something that’s more decorative and better quality, expect to budget £30-£40 per panel. If you choose to get a professional to help you put up your fencing, they’ll probably be able to get your panels at a cheaper rate.

It’s a good idea to talk to your neighbours before you start any work to avoid confusion along the way. But if the fence is definitely your responsibility and on your property, there’s no legal obligation to notify them. It’s also a myth that you need to erect a fence with the flush side without posts facing your neighbour’s property.

If there’s a fence dividing yours and your neighbour’s properties that needs maintaining or replacing, you’ll want to know who owns it. Start by checking your deeds to see if there’s an existing boundary agreement. If there isn’t, have a chat with them to see if you can come to an arrangement yourselves. 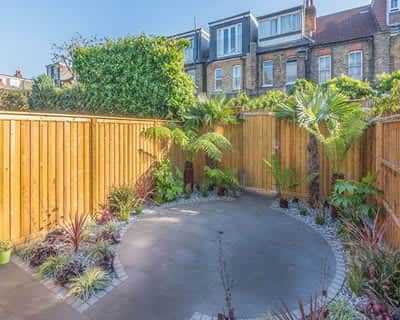 Other Top Projects in Goole

Are you a landscaper in Goole?